I lay flat in my small, urban yard and heard the cheering fans at Camden Stadium, the young urbanites at the bar at the end of the block, and the occasional radio rolling by in a car. I sank my body into the slate footstones, trying to unfurl the tightness stored in large quantities, imagining the Earth’s warm core seeping into me. Listened. The chorus of birds sang to their young, caught in the interstices of the cacophony of the city. The new leaves and pink and white buds on the crab apple tree were splayed with sunshine. I sat up and dipped my brush into amber, sapphire and emerald watercolors. The paper was fresh and white.

Buddy, my black and white cat, meowed to come join me and I opened the door. He settled comfortably under the tree, hoping the birds wouldn’t notice him. Suddenly, Buddy decided it was his chance to jump into the neighbors yard and try to find that orange tabby that lives somewhere in the alley. Yikes! Buddy is a rescue, with no claws and two teeth. The tabby outweighs him by at least 10 pounds. The orange tabby probably eats rats bigger than my cat. I ran out the gate, captured Buddy, and threw him back inside. He was indignant, but saved from his own intentions, as we all need to be at times. I went back and completed my painting. It was a glorious Sunday. 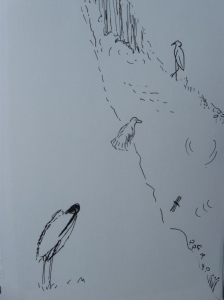 Sun is dying in the western sky

with death and beauty.